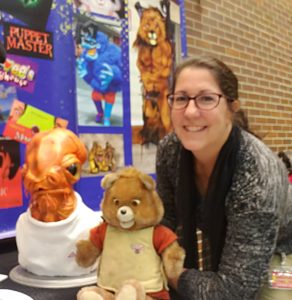 Lynette Eklund has been in the special effect industry since she was 20. Her work comes in all sizes, from stop-motion miniatures to full-size dinosaurs. With over 50 IMDb television and film credits to her name, she has contributed to Nightmare on Elm Street 5: The Dream Child, Beetlejuice, Species I & II, the Emmy Award winning miniseries The Stand, and Oscar-nominated The Lost World: Jurassic Park, among others, while working with the likes of Ben Kingsley, Jeff Goldblum, Gore Verbinski and Stephen Spielberg. For more information check out IMDb.com

Lynette’s skills have also been used on the Teddy Ruxpin talking teddy bear; commercials for McDonalds, Duracell, and Budweiser, along with many more commercials; Tokyo Disneyland, Epcot, Universal Studios and several other amusement parks around the world; mentoring her long-time Con-going friend Lance Ikegawa; and painting limited-edition collectables for Disney sculptor Terri Hardin.

Currently, Lynette’s second film as producer and first as screenplay writer, The Hunted, is in post production.